The bankruptcy of FTX is pushing others to reveal their proof of reserves after the cryptocurrency exchange’s downfall was partially caused by holding large amounts of its own FTT token.

Crypto.com (CRO) has recently been part of this movement with it unveiling its holdings. But this has sparked concern as 21% of the exchange’s reserves were made up of the shiba inu (SHIB) meme token.

Crypto.com’s native token CRO has fallen in light of this news. As of 14 November, it had dropped in price by 41% in the past week.

Kris Marszalek, CEO of Crypto.com, announced on 11 November that the exchange is preparing a proof of reserves audit. This was revealed on the same day its rival FTX filed for bankruptcy, following a liquidity crunch.

As part of this announcement, Marszalek disclosed a preliminary set of its holdings with the analytics platform Nansen.

Nearly $3bn worth of digital assets were revealed in Crypto.com’s possession. The majority was in bitcoin (BTC), which made up 33% or roughly $800m.

However, Crypto.com has come under fire as BTC was followed by SHIB, a meme token known for its volatility.

The exchange held around $519m of shiba inu, making up 21% of all its assets. This was over $100m more than ether (ETH) and $270m more than its stablecoin holdings. 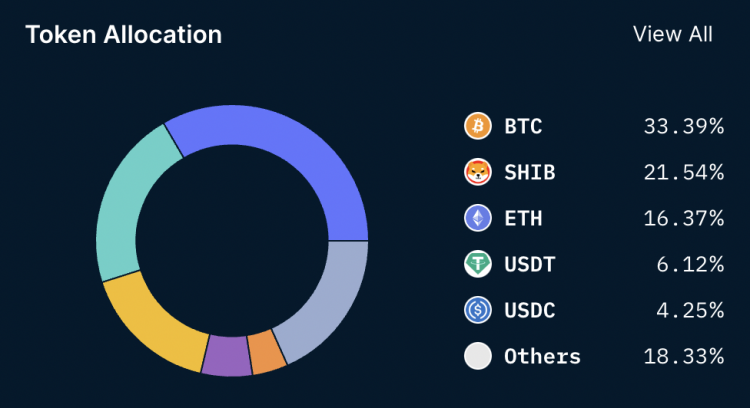 Over 50% of Crypto.com’s reserves are made up of BTC and SHIB – Credit: Nansen

While SHIB promises more utility than its inspirer dogecoin (DOGE), its primary use case is often considered as speculation and it has seen hefty price fluctuations over the past two years.

However, this was followed by more bearish news for Crypto.com. It was revealed on 13 November that Crypto.com had accidentally sent $400m ETH to the wrong address.

Marszalek said it intended to move the funds to a new cold storage address on 29 October, but instead sent it to Gate.io, another cryptocurrency exchange. But these funds were eventually recovered by the Crypto.com team.

Meanwhile, the CEO of Binance, Changpeng ‘CZ’ Zhao criticised Crypto.com. He tweeted: “If an exchange have to move large amounts of crypto before or after they demonstrate their wallet addresses, it is a clear sign of problems. Stay away.”

The CRO token has seen a steady fall after its preliminary reserves were revealed last Friday. It stooped to a low of $0.058 on 13 November.

However, it has shown signs of recovery at the time of writing and managed to climb 4% in the past 24 hours.

There are currently no responses for this story.
Be the first to respond.