Axie Infinity remains one of the most popular play-to-earn games today. It is also a leading project in the NFT space, with over $4 billion in cumulative trading volume to date. Surprisingly, there is a renewed interest in minting Axies lately, even if sale prices remain near $5, for the most part.

The year 2022 has been very rough for all cryptocurrencies and their associated projects. That also affected the play-to-earn ecosystem. Many games struggle to retain players, let alone grow their communities. Moreover, many in-game assets and currencies saw prices plummet amid the broader crypto sell-off. That is in stark contrast to how the value of Pokemon TCG cards has gone up last year.

However, it appears there is new interest in Axie Infinity lately. That may be due to Sky Mavis releasing a free-to-play game version. Newcomers can check out the ecosystem without paying anything, which may help them transition to the play-to-earn version. That would explain the increased minting of Axie NFTs in the past month. Although an average of over 500 per day isn’t too significant, there have been spikes above 650 and even 750 recently. 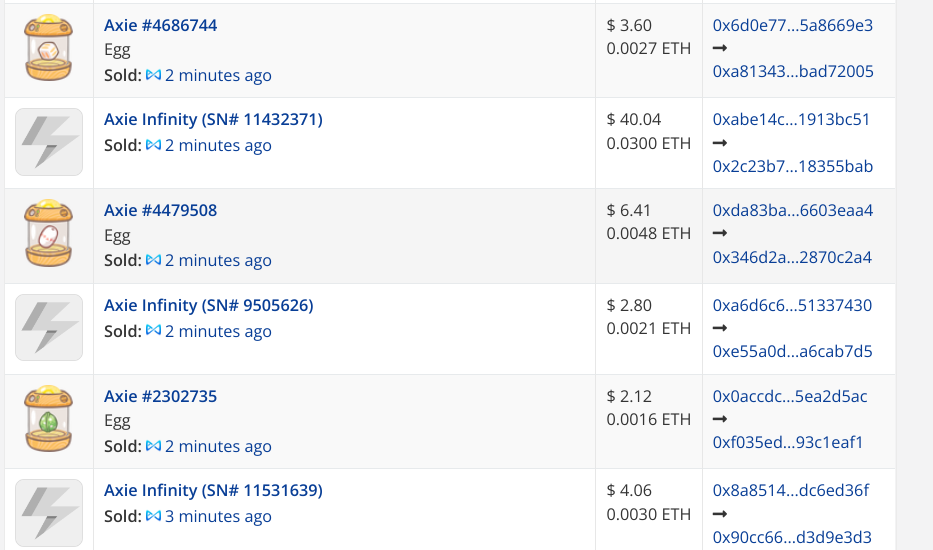 The development is curious overall. While it is relatively cheap to mint new NFTs due to Ethereum’s low fees, the average sale price isn’t too high either. More specifically, one can easily pick up an existing NFT for a few dollars. Buying an egg can still cost over $50, although that is a far cry from the hundreds of dollars one would have paid a year ago. With so many sales going for $2-$5, it isn’t hard to see why new players would find it easier to check out the game today.

The bigger question is whether the momentum will remain in place. Healthy sales and mints are a bullish sign. However, there are still under 2,000 market buyers per day, with dips to the low 1,300 range. Even so, it appears interest in the game has been rekindled. It is now up to the developers to retain that momentum and capitalize on it further.

Over $4 Billion In NFT Sales

Contrary to what most would think, Bored Ape Yacht Club isn’t the most successful NFT collection. It has garnered tremendous sales to the tune of $2.63 billion. However, Axie Infinity holds the crown with nearly $4.1 billion in cumulative sales. That is a surprising number, given the struggles the game has had for more than a year. It also maintains a healthy buyer-seller ratio of 1.33:1. As long as the buyers outweigh the sellers, the game will continue to be successful.

It is also worth noting these sales all happened on the Ronin blockchain. While that network has seen some issues, people still trust it enough to spend billions of dollars. Moreover, per CryptoSlam, Axie Infinity has over 18.317 million NFT transactions, second behind only NBA Top Shot (22.390 million).

None of the information on this website is investment or financial advice and does not necessarily reflect the views of CryptoMode or the author. CryptoMode is not responsible for any financial losses sustained by acting on information provided on this website by its authors or clients. Always conduct your research before making financial commitments, especially with third-party reviews, presales, and other opportunities.