Thursday morning brings some highly encouraging news on the persistently high prices that have weighed down the people of the United States. The Consumer Price Index (CPI), an important economic metric that measures the average change in prices paid by consumers for various goods & services, demonstrated a considerable drop in inflation for the month of December; bringing it to the lowest level in almost a year. With the latest CPI reading coming at 6.5%, it lends further credence to the argument of a declining inflation, which can act as a catalyst for the price of volatile assets like Bitcoin (BTC).

The Core CPI, which excludes the likes of volatile energy and food prices, rose 0.3% month-on-month, which exactly matches the market expectations. September’s 6.5% increase was the biggest jump since August 1982. According to the Bureau of Labor Statistics’ closely watched index, the underlying consumer prices advanced by the least in 15 months, therefore making it possible for the Federal Reserve to further reduce the magnitude of interest rates it has been implementing in the United States.

Prices have also decreased dramatically on a month-to-month basis, with cuts seen across the board for gasoline, utility services, medical care services, and used vehicle prices. The price hikes seen at restaurants were more moderate than expected, while the prices of new vehicles resided unchanged.

Stock futures dropped as the consumer prices report for December confirmed analysts’ forecasts of a slowdown in inflationary pressures. Futures contracts that tracked the Dow Jones Industrial Average rose by 28 points, which is a gain of 0.1%. Futures on the S&P 500 fell by 0.1%, while those on the Nasdaq-100 dropped by 0.2%.

The crypto market on the other hand has given mixed reactions, with the Bitcoin (BTC) price hovering at $18,304; representing a 0.02% decline in the past 1 hour in contrast to a 4.88% increase in the last 24 hours. Ethereum (ETH) price breached the $1,405 mark, at the time of writing. 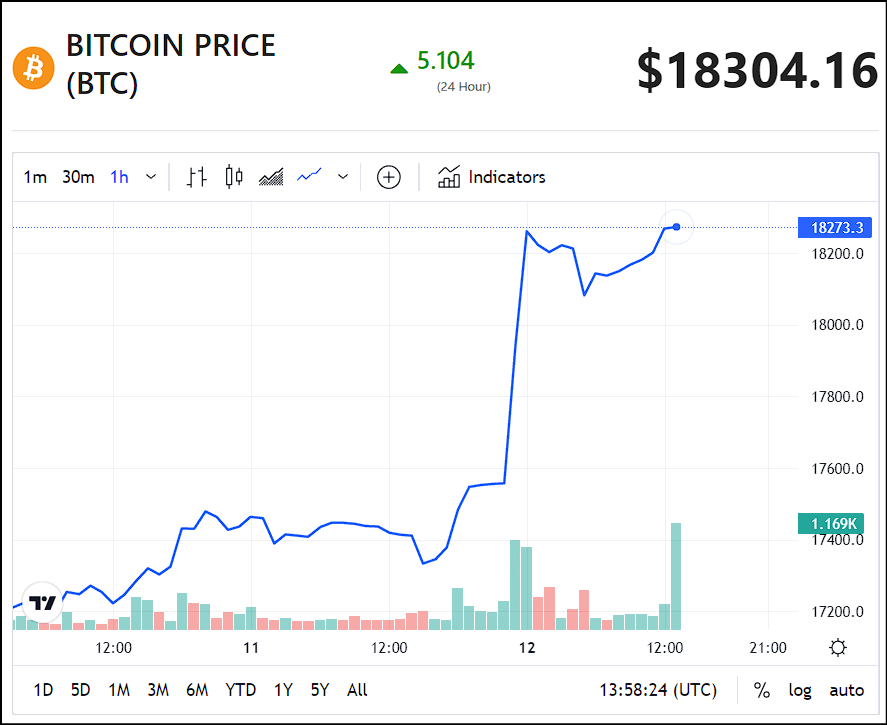 The spring of 2021 witnessed a surge in inflation, which was caused by a confluence of circumstances that led to price hikes reaching their highest levels since the stagflation era of the early 1980s. The pandemic caused a supply and demand imbalance, Russia’s invasion of Ukraine had an effect on energy prices, and trillions of dollars in fiscal and monetary stimulus caused an abundance of money to hunt fewer goods that were caught up in supply chain problems.

Pratik has been a crypto evangelist since 2016 & been through almost all that crypto has to offer. Be it the ICO boom, bear markets of 2018, Bitcoin halving to till now – he has seen it all.

The presented content may include the personal opinion of the author and is subject to market condition. Do your market research before investing in cryptocurrencies. The author or the publication does not hold any responsibility for your personal financial loss.